Why is there an authorship controversy? 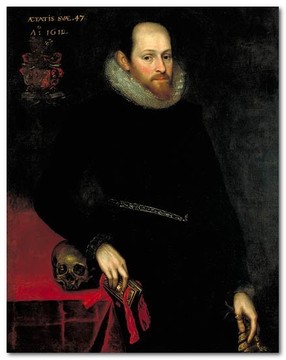 The Ashbourne portrait, owned by the Folger Library. Barbara Burris has identified this as a "lost" portrait of Edward de Vere.
William Shakespeare. 1564-1616. He was not of an age, but for all time. Born in Stratford-upon-Avon, he was nourished at the Stratford Grammar School, went to London, became a playwright, and attained eternal fame.
But there's one small problem. Almost since his death, people have said maybe it ain't so.
In other words: Shakespeare the playwright and Shakespeare, the actor of Stratford, don't seem to have the same background. (Mark Anderson, Shakespeare by Another Name.)
​
The greatest poet in English may be a complete unknown.

Or he may be Edward de Vere.

There are seventeen candidates for the position of "Shakespeare"--including Francis Bacon, Christopher Marlowe, and Queen Elizabeth herself--but Edward de Vere, seventeenth Earl of Oxford, is by far the most likely.
​Each of these facts is interesting; no one by itself is a smoking gun.

Chasing Shakespeares is about a man who finds a smoking gun.

Two graduate students together find a letter, purporting to be by one W. Shakespeare of Stratford, saying he didn't write the plays. Posy Gould, daughter of a Hollywood producer, has never met a high concept she didn't like and thinks it would be totally great if Shakespeare didn't write the plays. Joe Roper, a rock-solid Vermonter working his way through grad school, a guy who measures twice before he even thinks of cutting once, knows the letter is a forgery.
​
“Prove it,” says Posy. “You’ve got a week...”
Proudly powered by Weebly