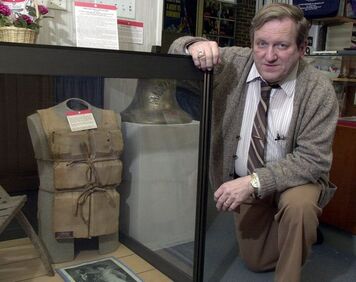 Ed Kamuda with Madeleine Astor's lifejacket
My favorite museum, because the Kamudas are some of my favorite people, is the Titanic Historical Society Museum in Indian Orchard, Mass. Started by the late Edward Kamuda and carried on by his family, this extraordinary small museum has items from many of the survivors. Consider joining the Titanic Historical Society, which supports it and publishes The Titanic Commutator.

The Titanic Museum in Belfast concentrates on the work of the builders. The original Harland & Wolff slipways from which she was launched are still here. A highlight is a tour of the SS Nomadic, the last remaining ship of the White Star Line, one of the tenders that ferried people to Titanic on her single fateful voyage. If everything went well, among the list of contributors to her restoration, you'll see Alexander Reisden and Perdita Halley.

The Nomadic and the Titanic Museum. Copyright Titanic Museum Belfast.
Titanic sailed from Southampton, where over 500 families lost members to the disaster. Southampton's SeaCity Museum tells the stories of the crew--who they were, the huge variety of jobs they did, and how they survived. 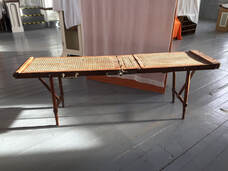 Copyright Lower Selma Museum. https://www.ehhs.ca/museum-exhibits.html
Halifax. Nova Scotia, has a grim connection with Titanic. From Halifax the Mackay-Bennett was sent out to find the bodies of the dead. Over 150 people are buried at the Fairview Lawn, Baron de Hirsch, and Mt. Olivet cemeteries. The Maritime Museum of the Atlantic has an exhibit of artifacts. The Halifax Titanic Resources page shows not only the artifacts but many records relating to Titanic victims in Halifax.

The tiny Lower Selma Museum in Nova Scotia has one grim reminder of Titanic, the embalming table on which John Jacob Astor's body was prepared.
Of the American exhibits, the most immersive in every way is the Queen Mary in Long Beach. Want to know what it was like to sail aboard a luxury liner? You can spend the night aboard the Queen Mary, take a tour, walk her deck, and visit the engines.  Janet Dawson and I spent a day aboard the Queen Mary before a Bouchercon and had a great time; highly recommended.
Tom Lynskey and Matt DeWinkeleer, co-producers of Titanic Honor and Glory, tour the Queen Mary with famous Titanic artist-historian Ken Marschall 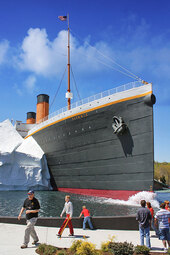 Copyright Titanic Pigeon Forge. This Titanic exterior is half-sized!
The Titanic exhibits at Branson and Pigeon Forge are extensive, interactive, and fairly similar; either is well worth a trip. Pigeon Forge has a good set of educational resources online.

Titanic: Honor and Glory is a group of dedicated Titanic geeks and 3D programmers who are creating a complete, hi-res digital model of Titanic and a game. It's crowd-funded; you can join in. They also supply Titanic backgrounds. They have a Web site and a Facebook page, where you can find marvelous things. (Full disclosure: I'm a supporter.)

Bill Wormstedt is one of the authors of On a Sea of Glass, an excellent recent book about Titanic. His Titanic site is a little out of date but well worth visiting.

What happened to the crew of Titanic?  Dr Paul Lee has gathered the definitive book of recollections by the surviving crew. Titanic: The Homecoming (also may be available through Bookshop.org)
Proudly powered by Weebly