Outlining a Big Fat Epic Fantasy (and other BFBooks) in Airtable

(Rather read this as a PDF?)

I love Scrivener. I couldn’t live without it. But recently I found a program that’s even better than Scrivener at organizing an outline for a big fat book.

The relational database Airtable www.airtable.com  is easy to use and free up until a generous point. It’s useful for everything from keeping track of marketing contacts to sorting your closet. It’s online and its databases are shareable, so it’s particularly useful if you and your friends are writing about a shared world. It even has a mobile app.

And it’s invaluable when you’re at the hundreds-of-incoherent-notes stage and want to get to an outline.

Here’s how I used Airtable to get from chaos to a workable outline in three and a half hours.

If you don’t know much about databases, there’s a quick intro to Airtable at the end of this article.

And here's the published sample Airtable base:
https://airtable.com/universe/expJWm4cemgOeWZy8/outlining-a-big-fat-epic-fantasy-with-airtable


This example is from a work in progress, a big fat fantasy novel with multiple locations, two timelines, and lots of characters. I’ll concentrate on one character, Ted, an academic from an imperialist country in an alternate 1946, who’s writing a biography of a colonial poet, Aliveiro.

I started, Marie Kondo style, by dumping everything onto the floor—in this case, into a table in the database. Scenes, ideas, good lines, anything. I called them “Elements” because “Things” sounded a little wussy. Here’s a sample:

Some aspects of the book, like characters, were special types of thing. I gave them their own tables and names. Different types of things had different attributes. Characters had nationality, descriptions, gender; scenes had locations, points of view, and so on.

Here are some of the attributes of elements. As I played around with the outline, I added and changed attributes and redefined “elements” to be more or less “things that might be in scenes.” Some of their attributes included chapter, characters involved, POV, location, character arc, and that necessary catchall, notes.

Now I had things in a database, I wanted to start sorting them in useful ways. Many programs sort by chapter and location, but I wanted to try a sort by character arc.

Ted has a fairly simple character arc.  He starts out unsympathetic and eventually changes sides. I filtered so I had a view only of elements involving him, then gave his character arc five stages, 1-5.

(Why 5? Why not 5? Airtable lets you change things on the fly, much more easily than Excel or my dear Scrivener.)

I assigned a character arc number to every element relating to Ted. If the element didn’t relate to his character arc, I left it blank.

Then I grouped by the stages of the character arc.

Pretty thin, but more promising than hundreds of notes on the floor. I added more bits and pieces and changed others. For instance, in the first version there was a note about “the place of women” in the colonial culture. It didn’t seem to fit in. How about the place of native Icarans instead? That gave Marcelinho (Ted’s servant, a colonial character) more to do.

What could I add, purely from a plot perspective, that’d pay off later? (Ted has a typewriter and a gun.)

I divided stages of Ted’s character arc into tentative chapters. 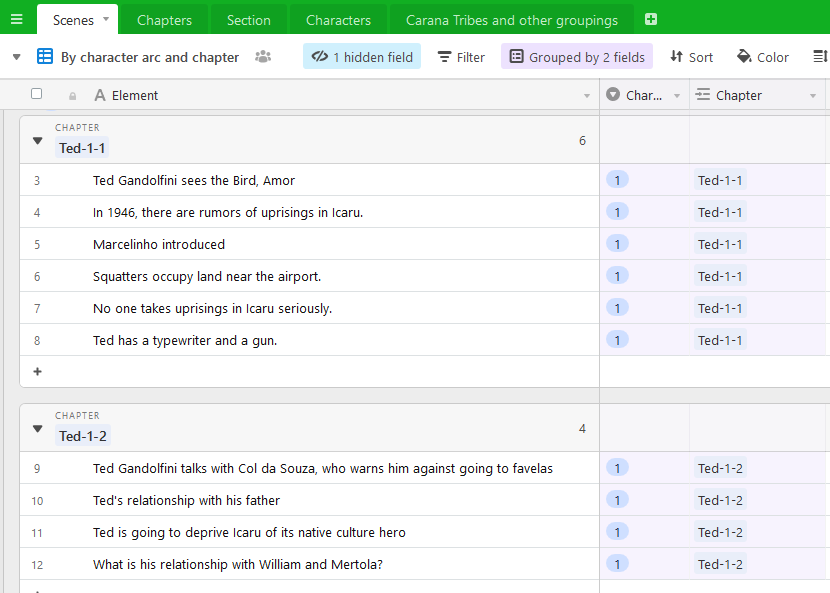 Things were firming up. The first version of character arc section 2 had been tiny. I made it even smaller by moving the item about squatters into section 1.

Now the other two original items were setting the theme and mood for section 2: Ted’s changing attitude toward Icarans, the first betrayal, the first hints that things aren’t what they seem. These gave me ideas for more elements related to his character arc. 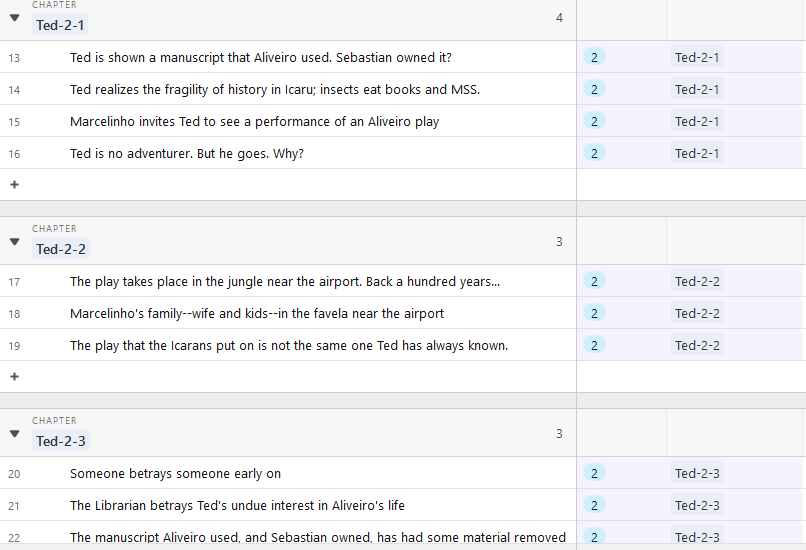 Thinking in terms of character arc automatically made me think about character emotions. Ted’s more complex a character than he gives himself credit for. He’s a sad little stick of a man who’s writing the biography of a wild, vivid poet-politician, in order to discredit the man. But Aliveiro is the fire where Ted warms himself, and eventually Ted’s going to let himself burn. That makes his inner life key. By thinking about something other than chapters, I could foreground Ted’s development. What does he have at stake in each chapter? What happens in him, not just to him?

I could spot problems as well. Here are the notes for Ted, character arc stage 1, chapter 1: 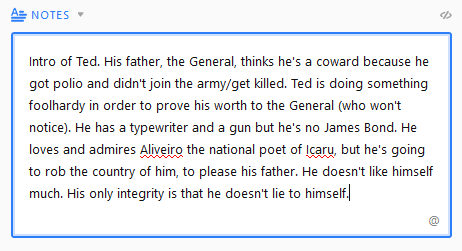 The notes showed a potential problem: we were seeing Ted’s background but not yet seeing him develop. Maybe that was OK—it’s his intro—but it wasn’t as strong as it could be.

Clearly I could sort by other features as well.


I could also link between things:

Scrivener is still the basic tool that every writer needs. But Airtable gives you additional ways to sort, query, and examine what’s in your book.

A table is a list of information about some group of objects of the same type, for instance A base is a group of tables that can be linked to each other.

In a table, the name of the object always appears in the leftmost column. Many databases require you to have unique names for objects. Airtable doesn’t.
You can define the type of an object however you please, and change it when you want to. In our example, “chapters” could be part of “elements”; it was just handier to give chapters their own table.
Any object can have attributes. Characters can have physical description, gender, nationality, history…anything you please. Locations can have timelines and buildings.
You can create multiple views of any table. You can set up a new view of any table, filter it so only some information shows in that view, sort that information, and hide what you don’t need. Now your information is more usable. Add new views and switch views using the downward-facing arrow next to “Grid view.”

You can link tables from a single base together and see them in a single view. Elements and chapters; chapters and characters; characters and nationalities. Once you link tables, you can look up any element of one table and see it in the other table.
Updating information anywhere it appears updates it everywhere.

Here’s the published sample Airtable base. Grab a copy and use it to design your own:
https://airtable.com/universe/expJWm4cemgOeWZy8/outlining-a-big-fat-epic-fantasy-with-airtable
Proudly powered by Weebly